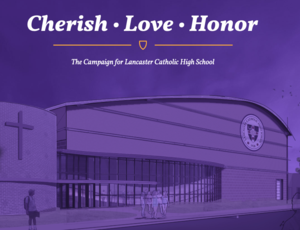 Cherish • Love • Honor: The Capital Campaign for Lancaster Catholic High School
On Thursday, November 12, 2020, history was made inside the halls of Catholic High, as Cherish • Love • Honor: The Campaign for Lancaster Catholic High School was announced, charting the course for the Second Century of developing intellectually astute, passionately faithful, and socially responsible learners.
Today, we share this monumental news with the entire Lancaster Catholic community; a public announcement of the capital campaign in support of a $12.7 million initiative that will transform the lives of current and future Crusaders. The campaign calls for Lancaster Catholic to take its place among the nation’s premier Catholic schools by completely transforming our cherished building to enhance the student experience and learning environment by creating attractive spaces for learning. Elements of Phase 1 include an Auditorium and Catholic Student Life Center, with a Student Commons and Dining Hall, as well as a STEM Innovation Center.
President Tim Hamer proudly announced that, through behind the scenes efforts that began in 2019, the campaign currently has $8.75 million (69 percent of total goal) in commitments! With this amazing news, Lancaster Catholic will begin Phase 1A of our Campus Master Plan this summer, when construction of the new STEM Innovation Center begins. LCHS will re-purpose the second floor of Reilly Hall into a state-of-the-art science and technology center.
Although this has been a very successful campaign so far, we need the support of many to reach the most ambitious goal in school history. As President Hamer explained, “We pray that the generosity of today’s benefactors will inspire many others to match the commitment of the pioneers who built Lancaster Catholic High School early in the 20th Century, so our school continues to thrive in the 21st Century and beyond!”
We ask that you keep our mission and the success of Cherish • Love • Honor in your daily prayers.
To learn more about our campaign, visit www.cherishlovehonor.com.
Print