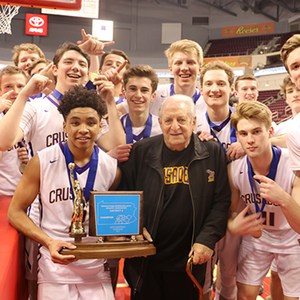 The Lancaster Catholic High School boys and girls basketball teams and members from the swim team are gearing up for the PIAA State Championship Tournament this weekend.
Both basketball teams are preparing for the PIAA State Basketball Tournament. The girls team will open the tourney on Friday at 5:00 p.m. at Garden Spot against Prep Charter. The District 3 Champion boys team will play on Saturday at 5:00 p.m. at Warwick against West Philadelphia.

Pre-sale tickets are $6 for adults and $3 for students and will be available at LCHS on Thursday and Friday. All tickets will be $6 at the gate and Catholic High gets a portion of all pre-sale tickets. Tickets will be sold during lunch and in the athletic office.

Kayla Sudbrink also qualified for the PIAA State Swimming Championships in the 200 freestyle. Good luck to all the Crusaders competing!
Print