Lancaster Catholic History from Past to Present

In early 1928 the pastors of the existing Catholic parishes in Lancaster County concurred that Catholic education on a secondary level was a necessity. On April 11, 1928, plans to raise funds to erect a central Catholic high school were finalized.
The pastors decided not to delay the opening of the school until a site could be selected and construction completed. The newly-organized Board of Directors accepted an offer to use rooms at St. Mary’s parish school as temporary quarters. Classes were begun at St. Mary’s on September 4, 1928, with the Reverend Paul A. Gieringer serving as Principal.

The Rossmere Ball Park was the site chosen for the new high school. The cornerstone was laid on May 26, 1929. On January 6, 1930, the first students entered the new building, now referred to as Old Main. Classes began formally on January 10 with an enrollment of 125 students and a staff of eight teachers. Three courses of studies were offered – the Classical, the Scientific and the Commercial. Lancaster Catholic High School achieved accreditation by the Pennsylvania Department of Public Instruction shortly after the move to the newly dedicated building. Accreditation by the Middles States and Maryland Association was accorded in 1936.

As the student body and faculty increased in number, it became necessary to open a special annex at the Holy Trinity Parish School in Columbia. By 1946, freshmen and sophomore students who were Columbia residents attended class in the Annex, traveling to Lancaster for their final two years.

In 1951, it was necessary to rent two rooms at the neighboring St. Anne’s School for freshmen girls. Plans were begun for the construction of additional facilities to accommodate the increasing numbers of students who were enrolling at Lancaster Catholic. Student enrollment reached a high of 530 that year. The new addition, Reilly Hall, was dedicated on September 12, 1954.

By 1959, expansion was again imperative. The student population had exploded to 923. A third level was added to Reilly Hall, providing nine additional classrooms. In November 1961, the Board of Directors was informed that a major physical expansion would be needed within two years.

Thirteen acres of land were purchased to allow for the construction of a lighted football field to seat 5,000, with locker rooms, restrooms, press box, refreshment stands, practice fields and parking. An addition to the school was constructed on the site of the former football field.

With contributions from the parishes and Catholic families of Lancaster County, pledges totaled approximately one million dollars. By September 1965, students were able to use the new facilities. The new structure was joined to the rear of the original building and Reilly Hall.

In 1970, Lancaster Catholic began its participation in the Lancaster County Vocational-Technical programs, providing alternate educational programs to students interested in learning a specific skill or trade.

The cost of operating the school during this period escalated. Enrollment continued to increase with the apex being 1325 students in the mid-1970s. This increase occurred as the number of religious teachers declined to warrant an increase in the number of lay teachers employed. For the first time, tuition was charged.
In 1980, Father Joseph Coyne, principal, established an Office of Development to coordinate programs to identify alternate sources of annual revenue. For the first three years, Annual Funds were conducted and a proposal to the Raskobo Foundation resulted in a grant to install energy-efficient windows in Old Main and Reilly Hall. In response to the need for major physical renovations, a capital campaign drive was imitated in 1984 to run a period of three years. The campaign, “Challenge of the 80’s” sought to raise $750,000. The Foundation Board, established in 1982, directed the campaign. Approximately 1.2 million dollars was contributed by the time the campaign was completed in June 1987. A single gift of $500,000 was designated by an anonymous donor for the renovation of the Main Lobby (named Gieringer Lobby after renovations), Rossmere Stadium and fields, and the installation of an all-weather track. By mid-1987, plans to acquire 5.5 acres adjacent to the athletic field were completed. Known as Riley Field, this tract has allowed for the inclusion of soccer in the athletic program and a home field for the baseball team.

During this period, an office of Public Relations and Recruitment was opened in order to coordinate the marketing of Lancaster Catholic High School. For the first time, a laywoman served as Chairman of the Board.

1981 marked the inaugural of the annual Athletic Association Festival. The festival began as a three-night event to help fund the school’s athletic programs. Within a few years, it was expanded to a six-night event. By 2006, its 25th Anniversary, over $1.5 million dollars was contributed to the Crusader Athletic program.

In 1989, the first Student Assistance Team was formed and has been active since its formation. The program identifies high-risk teenagers who are having school-related problems because of alcohol/drug use or mental health issues.

The School Board adopted a fair share tuition program beginning with the 1990-91 school year. In 1998 the school added the services of Private School Aid Services, PSAS.

The early 90’s brought the annual phone-a-thon to the Office of Development as a way to solicit alumni for donations to the Annual Fund. Money collected through the Annual Fund money is used to supplement the day-to-day functions of the school to help cap the yearly tuition fee.

In 1990 Reverent John Pallard, O.M. I became the first principal not appointed to the position by the Bishop of Harrisburg. Father Pallard was selected by a committee formed by the School Board with final approval coming from the Bishop. Prior principals had all been Diocesan priests.

A “Raze the Roof Program” in 1992 used a $40,000 grant from the Connelly Foundation along with money from local businesses to replace the roof over the cafeteria, kitchen and band room. That year an IBM Matching grant program was initiated to begin placing computers in the school. In 1993 a $25,000 grant from the Connelly Foundation was used to install new stadium lighting.

The 1996-97 school year began with the first layperson to serve as Principal. Mr. Dermot Garrett was selected by a committee formed by the Board, parents, and teachers. Father Allan Wolfe was assigned by the Bishop to serve as part-time Chaplain at Lancaster Catholic. Father Wolfe continues to serve as Chaplain.

In 1996-1997, the Academic Achievement Center was established. Money from a generous donor was used to upgrade a previously empty classroom. The AAC is able to offer students with special educational needs a place for additional academic support. By 2000-01 the AAC staff was expanded from one full-time teacher in one room to two-full time teachers and a full-time aid in three rooms.

In 1997-98 the Gammache brothers bequeathed their farm to Lancaster Catholic. At the time of the bequest, the value of the farm was $1.25 million.
The Great Jubilee Year of 2000 was marked by a pilgrimage of the entire student body to the Basilica of the National Shrine of the Immaculate Conception in Washington, D.C.

A $25,000 grant from the John Frederick Steinman Foundation in 2001 was used to assist with the replacement of the heating system.

In 2002, the Senior Class Pledge Program was initiated in which seniors were asked to reflect upon their experience at Lancaster Catholic and consider a four-year monetary pledge to the Annual Fund.

The greater Catholic High community came to the rescue after the 2003 Carnival was swept away in a week of torrential downpours, severely hindering our athletic budget. Individuals from around the county responded by making more than $70,000 in restricted gifts so that the Athletic Department could continue to thrive.

The Good Samaritan Program was established for the 2003-04 school year. The program is a service-learning initiative that is a requirement for graduation. Each student must complete 20 hours of community service a year.

The school received a $15,000 grant from the Koch Foundation in Florida to host a Catholic Music Festival.

Enrollment for 2004-05 rose to 766, our largest student body in nearly two decades. That year overall giving to the school topped the $1 million dollar level for only the second time in school history. The first time was 1997-98 when the Gammache farm was donated to the school.

During the 2005-06 school year, the Office of Advancement embarked on an ambitious strategic planning process. The process involved alumni, parents, friends, faculty, and students serving on six different task forces. The findings of the Task Forces were worked into a Strategic Plan which was the basis for a Case Statement that outlined the goals of a proposed capital campaign. Diocesan approval is pending for the capital campaign. Although the campaign is currently on hold awaiting a friendlier economic climate.

The 2005-06 school year finished with an enrollment of 806 students. In 2006 we expanded our athletic facilities with the addition of six tennis courts at the Rossmere Athletic Complex. In addition, the newly established Crusader Athletic Club funded improvements at the stadium including renovations of the field house and new goalposts. In 2006-07 the Lancaster Catholic Fund, formerly the Annual Fund, topped $452,471, far surpassing our goal of $425,000. Total giving for the year was $1.48 million. 2007-08 saw a 26 year high in enrollment with 824 students. Total giving for the year was $1.78 million. Earmarked donations included the installation of twenty Smart Boards.

The 2008-09 school year saw a dip in enrollment with 786 students. Even with the economic downturn, the Lancaster Catholic Fund raised $337,000. This was the third-best year for the Fund.

The school currently has thirty-seven endowed funds and scholarships established by donors to benefit the school and our students. Some of these funds help students with tuition during their four years at Lancaster Catholic while others are financial awards presented at graduation.

Lancaster Catholic High School looks forward with enthusiasm to the future. It is firm in its purpose, strong in its commitment to education that is truly Catholic, and proud of the foundation upon which the school was built. Lancaster Catholic High School will continue to offer the young men and women of this County an education for a lifetime.
Crest of Lancaster Catholic High School
The school seal of Lancaster Catholic High is an inspiring emblem to all, but doubly so to those who know its significance and background. Designed by Pierre de Chaignon La Rose, it is executed in red, blue, and silver, the last two being the party colors of the House of Lancaster. In the center of the silver cross is placed a book, designating a Catholic school. The motto from the Inspired Book of Proverbs, "Cor Sapiens Quaerit Doctrinam," or "A wise heart seeks knowledge," is imprinted on the book and has been symbolic of the high principles and motives of American Catholic education. In the upper left corner of the seal is a silver crescent, originally derived from the "Harris" arms, and now incorporated in the arms of the Diocese of Harrisburg; it is also a symbol of the Immaculate Conception under whose patronage the United States has been placed.
The red roses of the House of Lancaster used in the design were originally added to the seal to achieve effectiveness of design and are symbolically placed in the position of four of the five Sacred Wounds. The fifth wound, the heart, is supposedly covered by the open book and the inscription beginning "Cor..."
﻿
Lancaster Catholic High School Crusader Athletic Logo
Click here for more information and history about our outstanding Athletic Program. 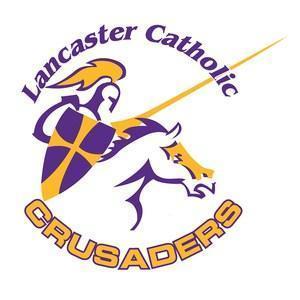